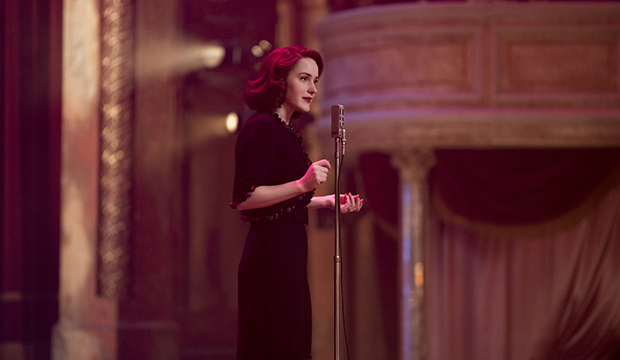 It’s been four years since Rachel Brosnahan won an Emmy Award for playing foul-mouthed comic Midge on Amazon’s “The Marvelous Mrs. Maisel.” Season 4 of the hit comedy brings the actress back into the Emmy race yet again. A poignant comedy act in a burlesque house and some tough love at Carnegie Hall might be enough to bring Brosnahan back to the winners circle.

Brosnahan scored her first Emmy nomination in 2015 for her guest role on “House of Cards.” She won the Best Comedy Actress prize in 2018 for the first season of “The Marvelous Mrs. Maisel” and has picked up three nominations for every season of “Mrs. Maisel” since.

Brosnahan’s episode submission is the Season 4 finale, “How Do You Get to Carnegie Hall?” In it, Midge and Joel (Michael Zegen) wonder if the stress they caused Moishe (Kevin Pollack) contributed to his heart attack, and she tries to figure out childcare logistics with Mei (Stephanie Hsu), but gets nowhere with the bewildered mother-to-be. She tries to crack jokes about the hospital situation during her stand-up set that night, but stumbles upon a startling revelation when she muses about the strength of nurses, and women in general: “Are women more important than God? What if we discover one day that we were always the ones in charge?”

Lenny Bruce (Luke Kirby) stops by to offer Midge an opening act gig for Tony Bennett, but the pair are forced to flee to his hotel room as the club is raided by police. In the hotel room, years of tension finally give way as the pair sleep together. After Bruce’s infamous Carnegie Hall performance, he berates her for turning down the Bennett job, insisting that if she continues to hide herself away, she will miss her window for success. Midge is left stunned and questioning her choices, looking out over the empty Carnegie auditorium.

The episode allows Brosnahan to display a range of emotions and performance styles. Her early scenes in the hospital are a perfect showcase of writer Amy Sherman-Palladino’s rapid-fire dialogue. And the raid at the club gives her the chance to lean into the wild physicality of the series’ signature long takes. But it’s the stand-up set at the club that proves to be the ace up the actress’ sleeve. She can crack raucous jokes while navigating an important character shift for Midge, as we see her realize her own potential through the set. Plus, it’s near impossible not to be sucked in when Brosnahan’s voice breaks as she tells the audience, “I just don’t want this man to die.” The audience roots for Midge here, and the ambiguous ending leaves you wondering what lies ahead, making this a fantastic submission to appeal to Emmy voters.