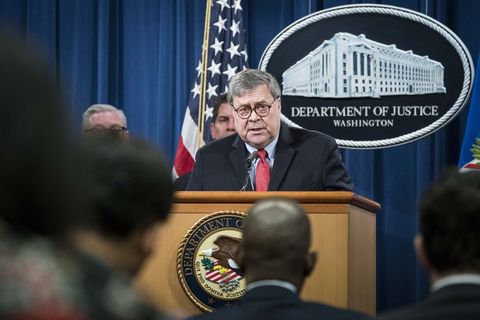 MANCHESTER, NEW HAMPSHIRE—In the halls of justice, Lenny Bruce warned us, the only justice is in the halls. And at least as far as the Trump Justice Department (William Barr, Proprietor) is concerned, it’s not even there. From the Washington Post:

The statement came hours after Trump tweeted about the sentence prosecutors recommended, saying: “This is a horrible and very unfair situation. The real crimes were on the other side, as nothing happens to them. Cannot allow this miscarriage of justice!” The senior Justice Department official, though, said the decision to revise prosecutors’ recommendation came before Trump’s tweet…The senior Justice Department official said Barr had not spoken with Trump about the sentencing recommendation for Stone, nor had the attorney general been informed in advance of Trump’s tweet.

And I am the Tsar of all the Russias.

The professional prosecutors recommended a sentence of seven-to-nine years for Stone, the professional ratfcker who was the last person indicted by Special Counsel Robert Mueller’s team, and whose crimes against democracy extend as far back as Watergate and beyond. Now, it appears, his wrists will be delicately slapped, and who would be surprised if a pardon was forthcoming thereafter?

Roger Stone’s crimes against democracy extend as far back as Watergate and beyond.

And, of course, this decision comes hard on the heels of Senator Lindsey Graham’s appearance on The Sunday Showz, wherein he promised to funnel the Volga Bagmen’s Ukraine shinola upwards to Barr, so that the DOJ can do all those “investigations” for which the president* tried to shakedown the Ukrainian government. This will all take place during a presidential election.

And there is only one candidate that has had the guts to say that, yes, if she gets elected, she will set up a commission to hold these people to account. That would be the person who is still polling in the top tier nationally, in the top three throughout the Super Tuesday states, including California, whose campaign is still hiring staff in Ohio, but who is said to be on political death’s door by people on TV who have spent the weekend fluffing someone else who finished a strong fifth in her neighboring state of Iowa, but who is said to be surging because she said something snarky on TV to the youthful mayor of South Bend, Indiana, who, like her, has numbers among Democratic base voters that remain in the petrified forest. Everything is so damned broken.

Aaron Zelinsky, who also played a key role in former special counsel Robert Mueller’s investigation, said in a filing with the U.S. District Court for the District of Columbia that he would not serve as the government’s counsel in Stone’s case going forward. The filing also notes that Zelinsky “resigned effective immediately” as a special assistant U.S. attorney for the District of Columbia, but he remains a Justice Department employee and will return to the U.S. Attorney’s Office in Maryland, the office told CBS News.

The banana republic is going bananas.

Update (5:06 p.m.): Another prosecutor quit the Stone prosecution. This thing had three shoes on two feet.

Charles P. Pierce
Charles P Pierce is the author of four books, most recently Idiot America, and has been a working journalist since 1976.