When Lenny Bruce published his autobiography, “How to Talk Dirty and Influence People,” in 1965, he was 39 years old. For several years he’d been recognized as the risqué one-man vanguard of a new type of comedy, in which he deliberately confronted taboo subjects such as sex, race, and religion.

But in 1965 Bruce was already seeing himself as a thing of the past. Writing about the Borscht Belt comics who preceded him, he acknowledged the inevitable changing of the guard. He too would soon be out of touch: “There’s nothing sadder than an old hipster.”

Lenny Bruce didn’t live long enough to fulfill his own prophecy. He’d be dead within a year, the victim of an accidental overdose. His supporters have long maintained that his addiction was a direct product of his despair over the legal trials that consumed his last years, as he fought a series of obscenity charges in the name of his art.

Bruce would have been 90 had he lived. And he’d be thrilled, says his lone survivor, daughter Kitty Bruce, to see his legacy preserved not for the hipsters but the nerds: On Thursday and Friday, Brandeis University will celebrate the opening of its new exhibit on the life and impact of the comedian with a two-day academic conference billed as “Comedy and the Constitution: The Legacy of Lenny Bruce.” There’s a registration fee for the conference, but the exhibit itself is free and open to the public and runs through the end of the academic year.

The conference will feature a keynote speech by Christie Hefner, a Brandeis alum and trustee of the Hugh M. Hefner Foundation, which donated an undisclosed amount to secure the acquisition of Bruce’s archives from his daughter; a talk by the attorney Martin Garbus, who represented Bruce in a high-profile First Amendment case; and a dinner hosted by Lewis Black, one of the many contemporary comedians who regard Bruce as a founding father. (Black is likely to have something to say about a recent New York Times story that stirred up some dust in the comedy world, asking whether today’s comedians actually find the patron saint of socially conscious comedy to be funny.)

Want the Globe’s top picks for what to see and do each weekend e-mailed directly to you? Sign up now for The Weekender.

Papers set to be delivered during the conference, portions of which will be streamed on YouTube, include remarks on the comedian’s feminist legacy, his role in the “Yiddishization” of American comedy, and one titled “How to Talk Dirty and Influence Constitutional Law.” Dinner on the first night will be preceded by a reception featuring a band playing Bruce’s favorite music, hard bop-style jazz.

“You can’t have Lenny Bruce without jazz,” Kitty Bruce said recently, on the phone from her home in Pennsylvania. “It’s a violation.”

The fact that this tribute will take place at an institution of higher learning — Bruce never went to college — would have felt like a vindication to him, said his daughter.

“He would have taken great pride in the fact that he was right,” she said, that his arrests “were a violation of his civil rights and freedom of speech.” In fact, Bruce was posthumously pardoned in 2003 for his obscenity conviction in New York.

Brandeis acquired Bruce’s effects — including his notes, letters, manuscripts, tape recordings, and family photo albums — in a deal announced in 2014. Kitty Bruce said she’d become aware of some pieces in the collection, such as letters she received from “Daddy” when she was a little girl living with her cousins’ family, only after the transaction took place.

“Of course I wanted them back, but it doesn’t go that way,” she said. Friends told her to be grateful, that in her possession, the letters would “turn into dust. At first I wasn’t happy, then I was grateful as all get-out. It just means that more stuff will be saved.”

Christie Hefner, who was chairwoman of her father’s Playboy Enterprises for more than 20 years, stepped down from that role in 2009. She hopes the exhibit at her alma mater helps comedy fans and students of American history understand that Bruce’s papers aren’t just some “creature caught in amber.”

The exhibit, on display inside the university’s Goldfarb Library through the academic year, will include interactive recordings of some of Bruce’s performances and private conversations (including rehearsals of his bits and a phone call with the poet Allen Ginsberg). The tapes, which were in rough shape when they arrived on campus, have been digitized with a grant from the Grammy Foundation.

Hefner’s father, a friend and confidant to Bruce who helped launch the comedian’s career and supported his legal battles, thought of Lenny as an integral figure during “a time of disruption and challenge to the status quo and conformity,” said Christie Hefner. “That was very much the energy behind Playboy. It was a generational prison break for young men.”

The exhibit, prepared by Brandeis archivists Leslie Reicher and Surella Seelig and overseen by Sarah Shoemaker of the library’s Archives and Special Collections department, was conceived, aptly, with the feel of a 1950s nightclub — lots of black-and-white photographs splashed with hot colors like fuchsia.

“It should feel like you’re walking into a club,” said Seelig, looking over some layouts of photo reproductions. “We want to make sure we’re setting the scene.”

Bruce’s legacy is an intriguing one to consider at an institution named for Louis Brandeis, the first Jewish Supreme Court justice and a key figure in the history of free speech, said Steve Whitfield, American civilization professor and co-chair of the conference. Particularly during the corrosive climate of the current political campaign, Bruce’s no-holds-barred satire is well worth revisiting, he said.

“There’s a way by which anything can be said, no matter how uncivil, cruel, or savage, and he opened that up for others who are not comedians,” Whitfield said. “Barriers have dropped or disappeared, and the full consequences for human dignity are not yet known. What was once private Bruce made performance.”

Hugh Hefner was drawn to the comedian, whose act was more social commentary than old-fashioned joke-telling, because they shared “the sense that they were fellow warriors in the fight against hypocrisy,” said his daughter, “and for a progressive, open-minded society.”

In her keynote, she plans to present Bruce’s comedy in the context of the social upheavals of the 1960s (“what America looked like on the surface, and what was roiling beneath”). Revisiting her old stamping grounds, she’ll also connect his crusade for freedom of expression to the ongoing debate over the issue, both on college campuses and in the society at large.

Bruce, undoubtedly, would find it funny.

Comedy and the Constitution: The Legacy of Lenny Bruce 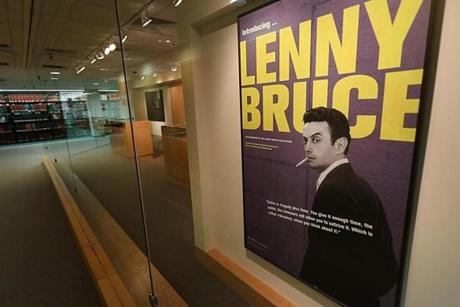