Season four of “The Marvelous Mrs. Maisel” was very, very heimish. The season, which took place in 1960s New York, brought back all the things we love about the fast-talking, sassy divorced Jewish stand-up comedian. From the quippy banter to the fabulous period costumes to all the big and small Jewish touches — Yiddishisms and a bar mitzvah scene and talks about God.

The ending of season four left a lot of things open for our heroes and left a lot of us jonesing for the next season, which, yes, is definitely happening.

So what do we know about this upcoming season of the show? Quite a lot, actually — let us break down all the information we have about “The Marvelous Mrs. Maisel” season five:

Will season five be the final season of “The Marvelous Mrs. Maisel”?

“We always had a general endpoint in mind for the series, but it was somewhere at four or five or six or something like that,” co-showrunner Dan Palladino told The Hollywood Reporter. “And it just seemed to fit in season five.”

Who will star and guest-star in “The Marvelous Mrs. Maisel” season five?

Season five will feature all the usual suspects — from Broshnahan to Marin Hinkle as Rose Weissman, Tony Shalhoub as Abe Weissman, Michael Zegen as Joel Maisel, Kevin Pollak as Moishe Maisel, Caroline Aaron as Shirley Maisel, Stephanie Hsu as Meil Lin, Alex Borstein as Susie Myerson and Luke Kirby as Jewish comedian Lenny Bruce.
The last season of “The Marvelous Mrs. Maisel” will also feature some returning season four stars.
“This Is Us” and “Gilmore Girls” sensation Milo Ventimiglia will be coming back as a “handsome man,” (Daniel Palladino said we will finally discover his name in this upcoming season, and it has been revealed that he will have a scene with Tony Shalhoub). “Gilmore Girls” favorite Kelly Bishop will also return as matchmaker Benedetta. According to Deadline, the following seven actors will join season five in recurring roles: Peter Friedman (“Succession”), Chloë Kerwin (“Asleep in My Palm”), Austin Basis (“Supernatural”), Josh Grisetti (“Nurse Jackie”), Michael Cyril Creighton (“Only Murders in the Building”), Eddie Kaye Thomas (“American Dad!”) and Lucas Kavner (“The Jim Jefferies Show”).
Alfie Fuller, who played Dinah Rutledge, Susie’s newly hired receptionist at her new talent agency in season four, will be coming back as a series regular. Jason Ralph, who just happens to be married to Rachel Brosnahan IRL, will be reprising his role as talent booker Mike Carr on the fictional Gordon Ford show, and will also be promoted to a series regular. Reid Scott, who plays Gordon Ford himself, is another actor promoted to series regular in season five.

What do we know about the plot of season five?

Here’s what where season four left us, and yes, spoilers ahead: — Midge has the chance to be an opening act for Tony Bennet, opting instead to try and make it on her own — at the same time, all that sizzling on-screen chemistry between her and Lenny Bruce was finally consummated when the two slept together in the final episode of the season.

Joel and Mei are about to become parents. Rose will be continuing her undertaking as a prolific matchmaker, despite warnings from the local matchmaker “mafia” and Abe is continuing his intrepid work as a theater critic, while Susie will likely be expanding her talent agency. “This is the family she’s curating,” Borstein said in a recent interview with Variety about Susie’s aspirations for her agency. “She has her sister, but in terms of feeling like there’s a center, she’s creating this family she’s never had, taking on other clients and bringing these children into her home.”

The Palladinos and the “Marvelous Mrs. Maisel” writers’ room is known for keeping their scripts and details of upcoming seasons pretty private, but we do know some things about the happenings of season five from casting calls.

The season’s casting new secretaries for Susie’s agency, which means Dinah may be getting a promotion!

The show was also casting extras and captains for a 1960s yacht party that was filmed overnight on open waters by Battery Park in downtown Manhattan — we’re really excited for that aquatic scene.

The show will continue to explore New York’s queer community  — there was a casting call for LGBTQ extras for a bathhouse scene. Borstein recently opened up about Susie’s unconfirmed queer identity: “This is an era when it was not something anyone would talk about, share, want to share or feel like it was anyone’s business — I mean, sexuality in general, across the board,” she said.

Someone in the Maisel world will once again be returning to prison — will it be Midge, or usual suspect Lenny Bruce, or maybe someone unexpected? The show recently put out a call out for prison guards and jailbirds.

We also know that Midge will be returning to the Gordon Ford show, and perhaps, like the comedians her character is inspired by (coughJoan Riverscough), will become a late-night sensation. We also know that things between Midge and Gordon may not end up being… so platonic. An ice-skating scene between the two of them appears to feature a kiss, judging by candid shots of the shoot, which happened on the ice rink in Rockefeller Center. 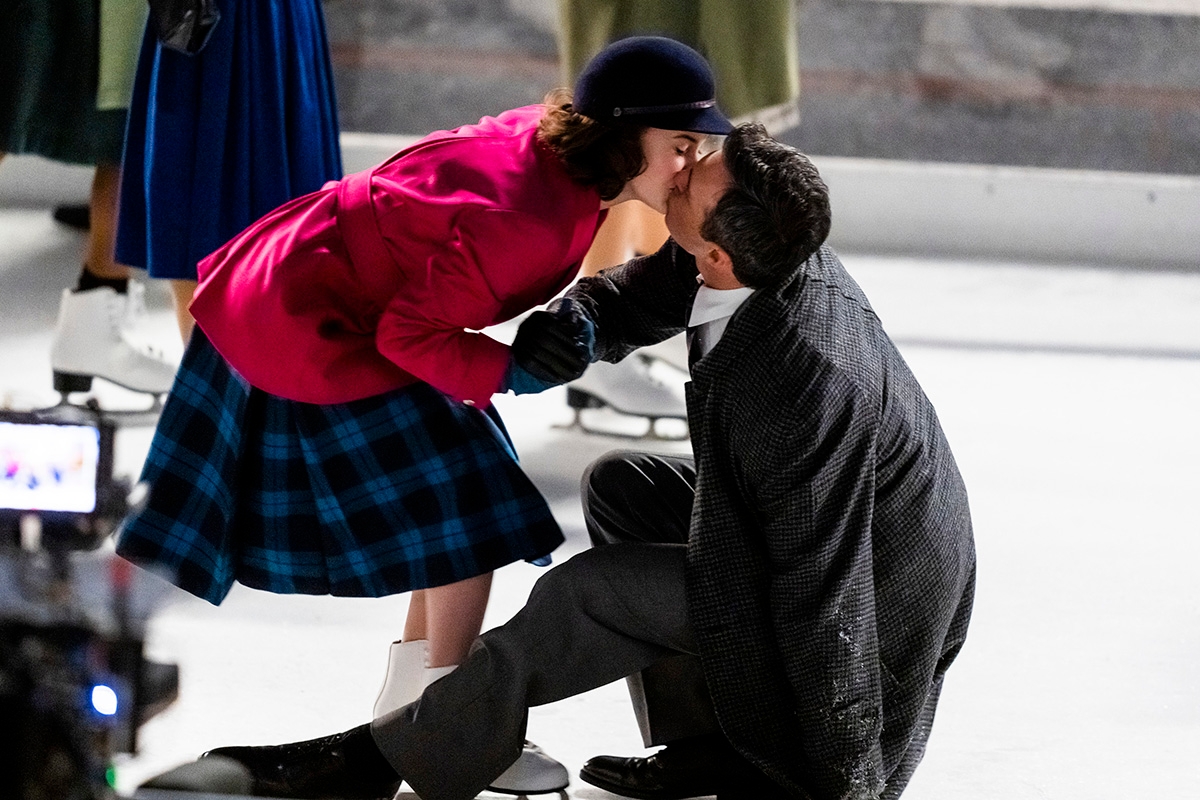 It also appears that we will be meeting Joel and Mei’s new baby — or perhaps babies? The show was casting for twin babies to portray “the infant children of principal characters.”

And of course, we know that someway, somehow, season five of “The Marvelous Mrs. Maisel” will feature Israel! The show was casting for “Jewish types” to play in an agrarian setting in Israel — so it looks like we might have some kibbutz scenes to look forward to.

“All I can tell you about Season 5 is that our heroine will not give up on herself,” Caroline Aaron, who is about to star in an exciting new Israeli show, said in a recent interview, “I will tell you that you will see her break through the glass ceiling a little bit.” We can’t wait.

Where is season five filming?

Like previous seasons, “The Marvelous Mrs. Maisel” will be filming where most of the series takes place — in New York and Long Island. A lot of the show is filmed at the Steiner Studios in Brooklyn, while others are filmed on location in various NYC spots, like Washington Square Park, the Strathmore building on the Upper West Side, Central Park and more.

The show’s synagogue scenes are filmed in East Midwood Jewish Center, and upcoming Israel scenes are rumored to be filmed somewhere on Long Island.

When is season five filming?

Right now! The season started filming around February of this year and is still casting for shoots in the New York City area at the moment.

When will season five premiere on Amazon Prime?

Before the pandemic, new seasons of “The Marvelous Mrs. Maisel” would usually premiere in December, just in time for the major holidays (ok, so just in time for Christmas, which hmph).
However, after its pandemic hiatus, the show returned to Amazon on February 18, 2022, and released two episodes weekly. We don’t know when this new season will premiere. Here’s hoping the season premiere will be in late 2022 or early 2023.
As for how Amazon will release the show, we don’t really know, but here at Kveller headquarters, we didn’t really love the two weekly episode format, so this is our formal petition for a complete season drop, please and thank you.