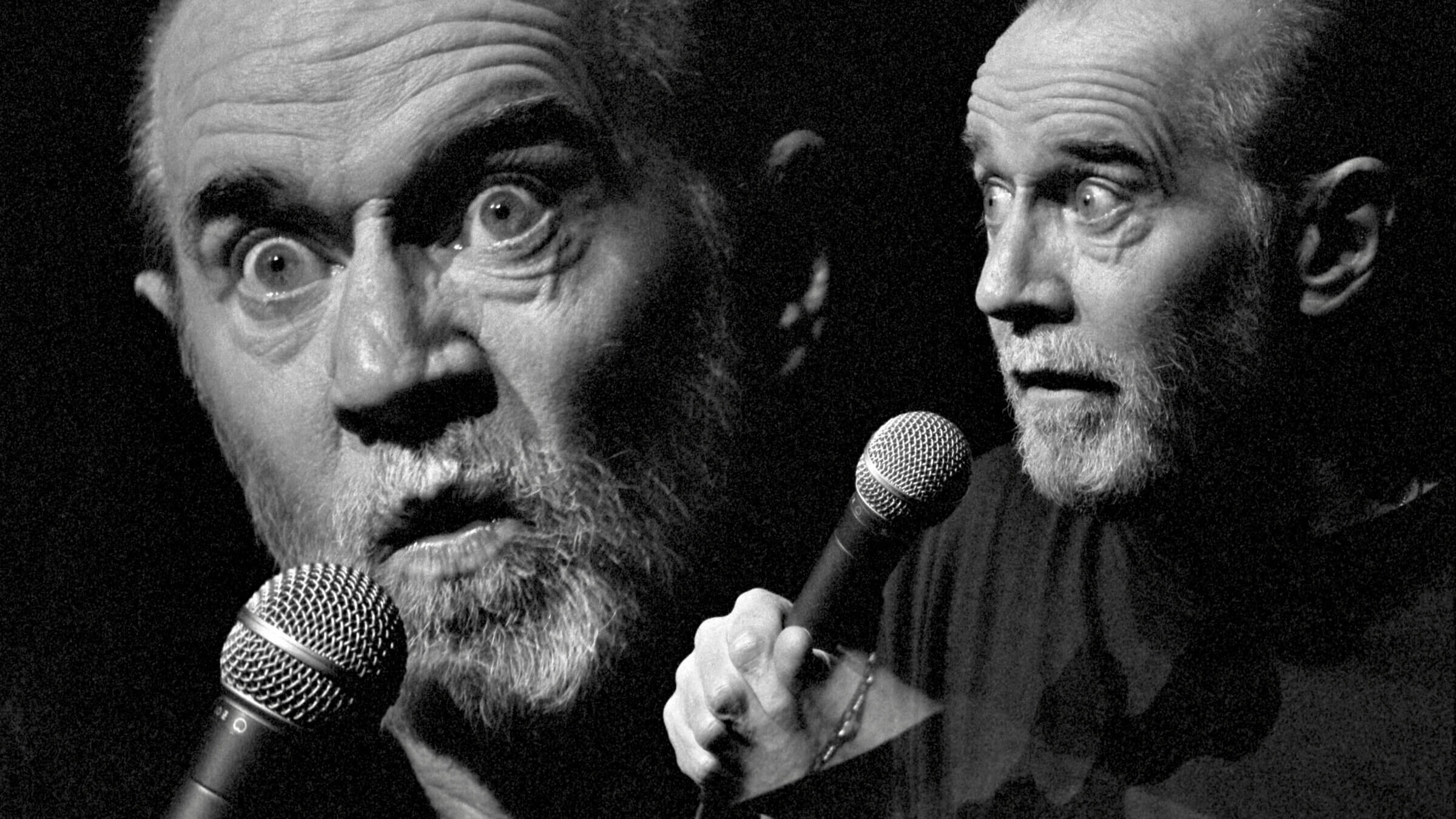 George Carlin performing in Wyoming in 1992. Photo by Getty Images

It may seem wrong to talk about the late comedian George Carlin in the context of the prophetic tradition. One of Carlin’s perennial targets of scorn, after all, was institutionalized religion. Drawing on his personal experience growing up as a Roman Catholic who attended parochial schools, Carlin often turned his sharply honed wit toward what he saw as the built-in hypocrisies of religious thought and practices. He was nothing if not an iconoclast, smashing the idols of “organized religion.”

But Carlin was an equal-opportunity iconoclast: Religion was not his only target. Carlin distrusted any corporate body of humanity. As presented in the new, two-part documentary “George Carlin’s American Dream” — co-directed by Judd Apatow and Michael Bonfiglio and streaming on HBO Max — Carlin claimed to love people as individuals. But as soon as they joined up in groups, even ensembles as small as duos, his bullshit detector went off. No good seemed to come from assemblages of people. In Carlin’s mind, once people began teaming up around a common cause, it was only a matter of time before they would descend into savagery. This, as much as anything, was the thematic thread running through his 50-year career as a standup comedian.

The great 20th-century theologian and activist Abraham Joshua Heschel wrote, “The prophet is not only a prophet. He is also poet, preacher, patriot, statesman, social critic, moralist.” That definition could serve well as a description of Carlin. He may not have been divinely inspired, but his mission — carried out primarily via the spoken word — was much the same as that of Amos, Isaiah and Jeremiah. “The prophets do not offer reflections about ideas in general,” continued Heschel. “Their words are onslaughts, scuttling illusions of false security, challenging evasions, calling faith to account, questioning prudence and impartiality.” To put it another way, Carlin was America’s “class clown,” to borrow the title of his landmark 1972 comedy album.

George Carlin was born in Manhattan to Irish parents who separated shortly after his birth; his father died when he was 8 years old. He remained close to his older brother, Patrick, throughout his lifetime. Patrick Carlin collaborated with his younger brother throughout the latter’s career and figures largely in the new documentary, having only just died earlier this year at 90. George grew up in Morningside Heights, where he attended Catholic grade school, before moving on to Cardinal Hayes High School in the Bronx, where a monsignor with great foresight once wrote on one of the many detention slips he issued Carlin, “He thinks he’s a comedian.”

After dropping out of high school, Carlin joined the Air Force in 1954 and trained as a radar technician. He received three court-martials and numerous disciplinary punishments in his short stint in the service, and received a general discharge in 1957. Having put most of his effort into his part-time work as a disk jockey at KJOE in Shreveport, Louisiana, during those years, he was now free to devote himself full time to radio.

Early on, Carlin’s ambition was to become a song-and-dance man like his idol, Danny Kaye (born David Daniel Kaminsky). But he got sidetracked by his sense of humor; in the late 1950s, he teamed up with Jack Burns, and the two began working as a comedy duo. They were mainstream comedians, wore suits and ties, played nightclubs and worked “clean.” Carlin’s shtick was his fast-paced delivery, pulling faces and making funny sounds. As a duo, they were pretty conventional; their act consisted largely of spoofing TV game shows, movies and the news. They were successful enough to have made an appearance on “The Tonight Show” when it was still being hosted by Jack Paar.

By the end of the 1950s, Carlin heard the brash young comedian Lenny Bruce on record. Referring to Bruce’s second comedy album, released in 1959, he once told an interviewer, “‘The Sick Humor of Lenny Bruce,’ we got that. And what it did for me was this: It let me know that there was a place to go, to reach for, in terms of honesty in self-expression.” As Jack Burns told Variety, “It was an epiphany for George. The comedy we were doing at the time wasn’t exactly groundbreaking, and George knew then that he wanted to go in a different direction.”

The example of Lenny Bruce (born Leonard Alfred Schneider) — whom Carlin befriended and with whom he got arrested after telling a police officer he did not believe in government-issued IDs — “radicalized” Carlin, suggesting as it did an entirely different approach to comedy, perfectly in tune with the burgeoning counterculture and more in line with who Carlin really was. Carlin ditched the suit and tie and adopted the counterculture uniform of long hair (often worn in a ponytail), beard and an all-black wardrobe. As a columnist for Variety explained, “The change would transform Carlin into more than a comedian: He also became a social commentator and philosopher — a position he would relish through the years.”

Despite Carlin’s irreverence and his freewheeling, anti-establishment tendencies, he appeared on “The Tonight Show” — often as a guest host — around 130 times. His first solo appearance, in 1962, occurred during the interregnum between departing host Jack Paar and arriving host Johnny Carson. Guest host Mort Sahl (born Morton Lyon Sahl) was himself a pioneer of the kind of social satire that would become Carlin’s bread and butter. During the Johnny Carson era, Carlin was one of the most frequent substitute guest hosts on “The Tonight Show.” Carlin also frequently appeared on TV programs hosted by Merv Griffin and Ed Sullivan. Back then, this was how comedians measured success.

In 1970, record producer Monte Kay (born Monte Kaplan) founded Little David Records with comedian Flip Wilson as co-owner. They lured Carlin away from RCA Records and recorded a Carlin performance in May 1971, which they released as “FM & AM” in January 1972. The album earned Carlin the 1973 Grammy Award for best comedy recording. Later that same year, Little David released Carlin’s landmark album, “Class Clown,” widely regarded as one of the greatest comedy albums of all time. “Class Clown” included Carlin’s most famous routine, “Seven Words You Can Never Say on Television,” which picked up where Lenny Bruce left off in pushing the envelope of what kind of language comedians could get away with using.

Carlin dedicated the album in its liner notes to Bruce, “for taking all the risks.” His “Seven Words” routine caught the attention of the FCC, which then issued an order prohibiting the broadcast of the words as “indecent”; the Supreme Court upheld the order, which still stands today. The routine became a staple of Carlin’s live act, for which he was arrested numerous times. It was a simpler time, however, and cooler heads prevailed; the charges were always dismissed.

The publicity surrounding the “Seven Words” brouhaha made Carlin famous. He hosted the premiere episode of “Saturday Night Live” in 1975. The following year, he was a frequent guest on the “Tony Orlando & Dawn” TV variety show, providing that relatively tame program with some legitimate counterculture credibility. Most significantly, Carlin was a pioneer of the cable TV comedy specials that are now a regular platform for standup comedians. The first of Carlin’s 14 stand-up comedy specials for HBO was filmed in 1977. It was only logical that Judd Apatow’s Carlin documentary should find a home with HBO, too.

The documentary reviews the course of Carlin’s life and career as a series of professional and personal ups and downs — Carlin struggled with cocaine addiction for decades, which undoubtedly contributed to his decades-long struggle with heart disease. Nevertheless, through it all, Carlin produced 23 comedy albums, several TV shows and three books; he won four Grammy Awards for spoken comedy album and was nominated for five Emmy Awards. Carlin also appeared in several films, including “Bill & Ted’s Excellent Adventure,” and he played Mr. Conductor on the children’s TV show “Shining Time Station.” Carlin died in 2008 at age 71.

In a recent article looking back on Carlin’s legacy, a New York Times commentator wrote, “That Carlin’s work endures long after him is not only a testament to his talents; it’s a sign that his frustrations, which he expressed humorously but felt authentically, still resonate with audiences, and that the injustices he identified in American society persist to this day.” A persistent question raised by the talking heads in the new film is how often people wonder what Carlin would make of the news of the day, a testament to the way his iconoclastic point of view has penetrated our critical cultural outlook.

As reflected in the documentary, which includes commentary by Jewish comedians such as Jerry Seinfeld, Roseanne Barr and Jon Stewart, by the end of his career Carlin went “dark,” as some of the interlocutors say. He ranted about the relationship between Planet Earth and its human inhabitants in apocalyptic terms. He claimed to enjoy news and images of people falling victim to natural disasters, epidemics and human-made horrors. While he seemed dead serious, almost to the point of misanthropy, he was making a rhetorical point in the tradition of the prophets — calling humankind to account for its failures, its egotism, its materialism and its unrepentant death instinct.

While organized religion was always at the top of Carlin’s shit-list, the film footage of live performances from his last few “dark” years reveals him to be not a nihilist but, surprisingly, what The New York Times called the possessor of a “humanistic spirit.” As he himself often said, “Scratch any cynic, and you’ll find a disappointed idealist.” In the end, Carlin revealed himself to be a kind of modern-day prophet, mercilessly driven to spread his message of doom and gloom, thereby betraying the disappointed idealist within, however broken and cynical he may have been.

Seth Rogovoy is a contributing editor at the Forward.