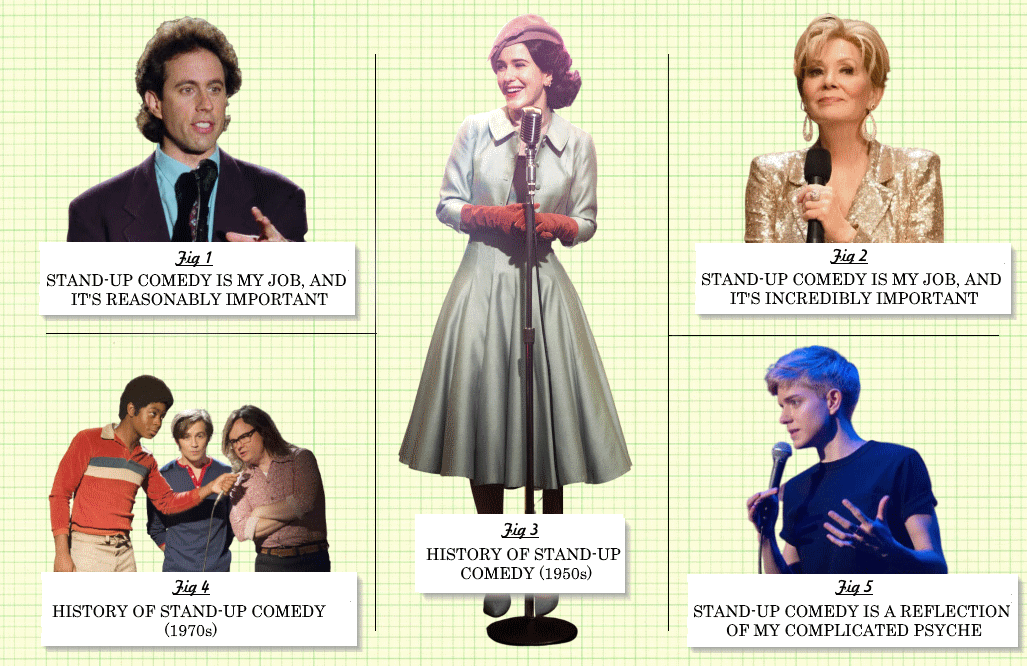 What is it about stand-up comedy that fascinates us so? It seems we just can’t enough of the idea that something so seemingly casual and off the cuff — someone standing at the front of a room, telling jokes for a few minutes — could be the product of years of hard work and existential anguish. A number of films have been made over the years that delve into the personalities of comedians and what they’re like offstage, but increasingly television has also become fertile ground for exploring the world of stand-up comedy.

If there’s an epicenter for stand-up, it would be The Comedy Store, which played a pivotal role in the careers of most every major standup comic of the last half century. The famed L.A. comedy club has been the subject of multiple TV series over the the last few years (both scripted and not), and this week sees the latest — Amazon’s three-episode docuseries Phat Tuesdays, which centers around the club’s Tuesday Night showcase founded by Guy Torry for Black performers after the L.A. riots in 1992.

Of course, the docuseries format is just one animal in this genus. Standup comedy has played a role in various different types of shows over the years, each trying to get to the heart of the men and women who make us laugh by showing the world of standup comedy in a different light:

Stand-Up Comedy Is My Job, But That’s Not What’s Important

In the 1990s, there was a wave of sitcoms starring successful stand-up comedians, and although the grand majority of them cast the stand-up in a different job, their characters hewed closely to their stand-up personae. Drew Carey worked an office job on The Drew Carey Show. Ellen Degeneres worked in a bookstore on Ellen. Tim Allen was a home improvement expert on … well, Home Improvement. Sometimes characters got to actually play stand-up comedians by trade, but that was never the point of the show. Famously, Uncle Joey (Dave Coulier) on Full House was a stand-up comedian, albeit a cheesy one who resorted to puppet comedy later in his career. But you couldn’t fairly call Full House a show about a comedian. It was a show about a family terrorized by their bounding neighbor Kimmy Gibler.

On The Bernie Mac Show, Bernie’s character was a stand-up comedian, but the show was far more focused on him raising his sister’s kids than anything about his comedy career.

Stand-Up Comedy Is My Job, and It’s Reasonably Important

Of course, you can’t talk about the ’90s boom of stand-up comedians in sitcoms without talking about Seinfeld, a show that was nominally about nothing, which allowed it to be more about Jerry’s comedy career than if it had been about something. For as much as Seinfeld focused on observational comedy about life in the big city, Jerry’s exploits as a stand-up were often the subject of episodes. He dealt with hecklers, other comedians, out-of-town bookings, appearances on The Tonight Show, and countless asides from his friends about how his act was getting stale.

The closest any other sitcom got to replicating Seinfeld relationship with Jerry’s stand-up career was the short-lived FOX sitcom Mulaney, where John Mulaney played a fictionalized version of himself. The show — which even replicated early Seinfeld‘s stand-up interstitials — was pretty much snakebitten from the word go, and (unlike Seinfeld) never got the time to come into its own.

Stand-Up Comedy Is My Job, and It’s Incredibly Important

On Hacks, the HBO Max series that debuted its first season last year, the stand-up comedy career of the legendary Deborah Vance (Jean Smart) is not only central to the show, it’s the driving force of the show’s most important relationship, between the comic and her young new writer. Deborah’s career arc is under siege throughout the first season, as we see her try to hold onto her Vegas residency with both hands. But there’s also a ton of stuff with Deborah and Ava (Hannah Einbinder) wrestling with how to mold Deborah’s act itself and what form her comedy should take. This is a show about a stand-up comedian that really takes you into that world, far more than Seinfeld ever did.

Stand-Up Comedy Is a Reflection of My Complicated Psyche

In a marked difference from the ’90s, 21st century TV shows about stand-up comedians hew even closer to the stars’ lives. This means they’re comedians on TV just as they are in real life. They’re also darker and more psychologically complex than their more sitcommy counterparts. Pete Holmes’s character on Crashing wasn’t exactly going through Requiem for a Dream, but the show depicted a fictionalized version of Holmes as he struggled to make a career for himself in comedy. On Feel Good, comedian Mae Martin mines their own complicated past with addiction, playing a fictionalized version of themself as a stand-up living in England. On both shows, the characters are using comedy to work their way through their lives, which seems to have increasingly become the common view of stand-up comedy as depicted in film and TV.

This particular niche of the shows-about-comedians genre owes a lot to FX’s Louie, which became a cause celebre among critics and comedy types alike before star Louis CK’s sexual h misconduct scandal would cast a pall over the show’s legacy.

Fictionalized though it may be, The Marvelous Mrs. Maisel is constantly exploring the history and evolution of stand-up comedy, particularly centered on the Greenwich Village comedy scene of the 1950s. There was never a Midge Maisel (Rachel Brosnahan), but female stand-up comedians who got their start in the ’60s paved the way for those who came after them. The show does weave in some actual real-life comedians, most notably Lenny Bruce (Luke Kirby), although most of the other comedians we see are composites of one sort or another.

Showtime’s I’m Dying Up Here starred Ari Graynor as an aspiring comedian who finds work at an L.A. comedy club based on The Comedy Store. Melissa Leo played Goldie, the club’s owner, inspired by Mitzi Shore, who owned and operated The Comedy Store and auditioned a who’s who of the greatest comedians of the ’70s, ’80s, and ’90s. The series lasted two seasons and was more drama than comedy, but it reflected a continued fascination with the ecosystem of the comedy universe, especially when it came to where women and minorities fit into the mix.

In addition airing I’m Dying Up Here, Showtime also produced a docuseries on the actual Comedy Store, titled The Comedy Store.The five-part series featured a who’s who of (largely white male) comics who got their start at the club. Amazon’s Phat Tuesdays is set to pick up where The Comedy Store left off, with another all-star crew of comedians weighing in on how Guy Torry’s Tuesday night comedy night at The Store changed the ganme for Black comics.

Joe Reid is the Managing Editor at Primetimer and co-host of the This Had Oscar Buzz podcast. His work has appeared in Decider, NPR, HuffPost, The Atlantic, Slate, Polygon, Vanity Fair, Vulture, The A.V. Club and more.