Who is this Azazel?

I met Aza Jacobs and his wife Diaz at a Los Angeles screening of my film Towheads. Both of them are filmmakers. I noticed the two approaching before they introduced themselves to me. It was their hair that attracted me at first; thick and dark upon their heads, like crowns worn by a royal couple, the nobility of a natural and genuine world. Aza’s hair was wild, his curls anchored to his head, but drifting in different directions as if reaching for the newness of incoming tides. Diaz had black hair in a bun that sat atop her head like a dome at the center of a great city. They ruled. They stood out. I hoped we would be friends.

Aza and I do a Zoom call. Charlie Chaplin, the Clash and Lenny Bruce are on his walls. Diaz waves from the entrance of their room, then disappears. He gets a hot chocolate and sits. It’s a tradition that, when in New York, Aza orders me a pizza with anchovies. Then we hang. It’s different this year. This year I got my pizza and glass of red wine in a text. I miss our tradition. 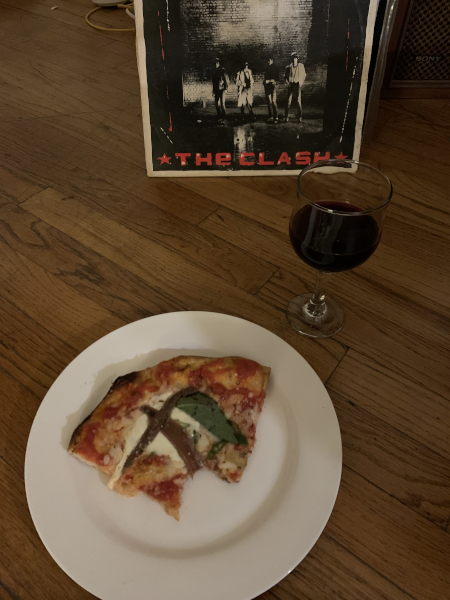 Aza Jacobs is a native new Yorker. He grew up in lower Manhattan, a teenager of the ’80s and ’90s. The children who made it through the ’80s in NYC were a special bunch, a rare species. Some were the offspring of artists who had pioneered Manhattan in the ’50s and ’60s. “Art above everything else” was their motto. Aza’s parents are from a generation who weren’t afraid to be hungry. He says of them, “They had no windows. They ate from a bucket of fish rejects.” These were parents whose existence was proof that you could pursue what you love to do and still survive. “Make something of yourself, kid” is what echoes in my mind when I think of those artists from the ’50s and ’60s. Aza’s father, Ken Jacobs, is an avant-garde filmmaker. His mom, Flo Jacobs, is an abstract painter.

Aza’s newest movie, French Exit, is coming to theaters on February 12. Aza isn’t sure where to see it; the Manhattan theaters closest to him are all closed. Aza tells me he misses watching his films with an audience. The pandemic has taken that experience away. When filmmakers get to sit with their audience, they witness a real reaction to their work. It’s unlike all other reactions. It beats the reaction that requires a few days of thought and some fancy words on a page. It’s better than an email that says how good it was, better than a “like” on social media, better than a trophy. Aza is a filmmaker with a sense of humor. Part of his reward can only come from a live audience. When that first funny moment premieres on screen, the director holds his breath. Silence … then … he hears … laughter. There’s nothing more satisfying than being wrapped in the sound of joy from 200 or more smiling faces. Aza is missing this exchange in our pandemic year. I’m sure to tell him when and where I was laughing during French Exit. I know it’s important.

Aza brings lightness to reality. The moments he captures in his films are like shots of brandy that warm an unsettled belly. I revisit Momma’s Man, a film Aza made in 2008. He cast his parents as themselves. There is a scene of father and son sitting across from each other at a table. They have a serious topic to discuss. It’s quiet. We see his dad smirk. He winds up a toy with a crab body and human arms. It crawls across the table toward young Mikey. I can’t help but wonder if the crab-human toy was the torch being passed onto Aza; the torch of comedy passed from father to son. Aza says of his father, he’s a mix of Groucho, Harpo, and Chico all in one. Growing up, the apartment was filled with toys. Matters of the mundane could be dealt with playfulness. It seems important to Aza that you “recognize misery, then transform it to joy.” We wonder why “serious films” are always considered the “real films.” Funny is an art form, too.

As Aza’s new movie, French Exit, makes its entrance into the world, I’m entering menopause. The last rite of passage in a woman’s life. There’s a common fear that when women turn 50, they get discarded from society like power cords from outdated Apple devices. We keep them, but they’re useless. As the metamorphoses of “the big change” transforms our youth into something less firm, less lovely, less in demand, I start thinking about the middle-aged characters in Aza’s movies. He has quite a few. Momma’s Man, The Lovers and French Exit all give the spotlight to characters over 50.

Characters on screen make impressions on us. Whether it’s the ruby red flats a lady wears, or the pride in a man’s posture, or the wink after robbing a jewel, a character stays with us. They influence us, inspire us, ask us to look at ourselves, offer suggestions for the future. I search for women older than 50 on screen and I find a new one in French Exit. Frances, played by Michelle Pfeiffer, is a beautiful 60-something woman with red hair, sophisticated language, who’s sexy, confident, brave and rich. When her husband dies, she finds out she’ll be broke very soon. She’s been used to living an upper-class life. Can you handle being poor after you’ve been rich? I watch both the character and the actress. I’m looking at Michelle and admiring her for breaking a barrier. She’s one of a few leading ladies in the movies who are over 50. She and Frances, the character she portrays, are laying down another patch of road under new construction. There will always be older women turning off the highway, but nobody said they were done driving yet. Pfeiffer burns a bouquet of roses like no one else can.

Aza says that the character of Frances has given him a gift. This gift he carries with him now. What is this gift? It’s “how we exist if we exist without the things we identify with.” It took me a second to digest his quote. Then I knew I could relate. I was losing my youth. Losing something I’ve held onto for so many years. And now, like Frances and her fortune, it was disappearing. Who is Frances if she isn’t rich? Who am I if I’m not a young woman anymore? I ask Aza what it is he identifies with that defines his existence. He says film. Like many filmmakers, Aza realizes every film could be his last. Filmmaking is his identity. There is no backup plan. Only once was there a Plan B. He thought he could move to England, learn an English accent and be in a rock & roll band. Aza loves the Clash.

Aza is both young and old. He’s curious like the Young, he’s experienced like the Old. He says he wishes he had “the confidence of his youth and that feeling that you’re at the center of the world.” There’s no fear at that center. Now, at 48, he has some fear. It comes from taking so many risks in life. He still heads into the fire, but he knows how hot the flame is. He says it makes him more cautious and sensitive. I doubt the young Aza ever thought of himself as conservative. But it seems we all get conservative with some years of living. The fading of youth into maturity feels like a trade-off to him. He says it’s made him a better director.

Aza’s sensitivity is one of his greatest assets. He tells me that he “remembers at five missing being four.” He tells me how he can’t watch horror, because it stays with him. He tells me how The Shining terrorized him for years. It was the image of the old woman cackling in the shower that scared him. He dreaded going to the bathroom. When he had to pee, he had a ritual he performed. He’d jump into the bathroom and turn on the light at the same time. “One, two, jump and light on … OK, she’s not in there.” No old lady in the shower. I’m not sure if he’s still performing this ritual.

I ask Aza why he’s drawn to older characters in his films. He says he’s “always trying to get there before he gets there.” Living with older characters gives you the ability to prepare for what’s to come. Not to mention, what an honor it is to work with older actors. The ones who have made a career of acting have so much experience. They’re rich and deep like thick paint, layered like lasagna. Aza just simply feels. His deep empathy, and dread of seeing old ladies in showers, gives him the ability to shape believable and lovable characters out of a wide range of ages.

He paints me a picture. There’s a restaurant down below his apartment. It’s still the pandemic. There are lots of 20-year-olds hanging out and kissing, hugging and laughing with each other. Having the time of their lives. He presses his face against the window pane to look down at them. He’s scared to death. He knows if he was that age, he would have been with them. “But man, that separation between old and young, you can feel during a pandemic like no other time,” he says. “There’s probably a bunch of other 40- and 50-year-olds that are looking at these kids right now, faces pressed against the glass, saying, ‘Oh my God, look at them laughing and hugging.’ We can’t judge. We risked our lives on a daily basis when we were in our 20s.”

I call Aza a few days after our Zoom interview. A woman at his building is holding the door open for him. I hear her talking to him. “What’s your name?”

“Where do you come from?”

“No, where’s that name come from?”

“It’s Biblical. I didn’t do it. My parents did it. Azazel was a fallen angel.”

I ask Aza what made the angel fall. He said the angel didn’t believe there should be a hierarchy between Heaven and Earth.

Maybe there doesn’t need to be a hierarchy between the young and the old, either. In French Exit, Aza pairs Michelle Pfeiffer with Lucas Hedges to play mother and son. Aza proves once again that the dynamics of the old with the young have infinite possibilities for great cinema. Curiosity without fear, paired with experience and conservatism.

When I started our conversation, I announced to Aza that I’m going through a transition. Would I emerge from this cocoon and become the lady cackling in his shower? He understands from directing the TV series Doll & Em that women feel discarded as they mature. He tells me what he would say if he were disappearing from society: “I’m invisible now, and I’m watching you!”

As we get close to a year of life in the pandemic, I’m almost finished with Game of Thrones. I ask Aza what he’s watching. He says that “the stakes are obviously not as high,” but he and Diaz are hooked on Golden Girls. They’re on episode 101.