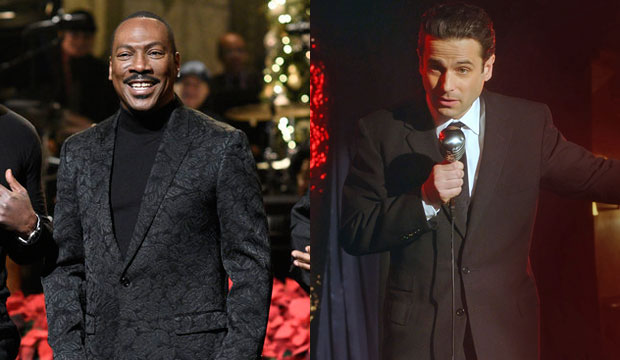 In this corner is the current holder of the Emmy title of Best Comedy Guest Actor, Luke Kirby, who isn’t a stand-up but plays one quite convincingly on “The Marvelous Mrs. Maisel” — namely, the controversial comic and free speech advocate Lenny Bruce, who died in 1966. Opposite him is real-life joke-meister Eddie Murphy, the “Saturday Night Live” cast member who took to the big screen in two must-see stand-up specials in the ’80s, HBO’s “Delirious” and the concert film “Raw.”

SEELuke Kirby (‘The Marvelous Mrs. Maisel’): Was Midge wrong to walk away from Lenny Bruce’s motel room? ‘I have to plead the fifth’ [EXCLUSIVE VIDEO INTERVIEW]

Kirby reprises his role as Bruce as he performs at the Gaslight in Season 3’s first episode. While scandalously exposing a “Playboy” centerfold as a prop, he runs into Abe (Tony Shalhoub), the dad of his pal Midge (Rachel Brosnahan), who stands up for him. The cops drag both of them to a jail overnight before Abe’s wife Rose (Marin Hinkle) pays their bail.

Kirby gets more to do on episode 5, when he visits Midge as she is on the road with crooner Shy Baldwin (Leroy McClain) in Miami at the famed Fontainebleau Hotel. He and Midge first show up on a pretentiously adult TV show “Miami After Dark” where they trade quips back and forth. They then enjoy a romantic dinner and a bit of slow-dancing. But Midge balks when it comes to entering her friend’s motel room and bids adieu. It is almost as melancholy of a moment as when Kirby did a spot-on performance of Bruce’s “All Alone” when he appeared on TV’s “The Steve Allen Show,” which won him the Emmy in Season 2.

SEEDon’t weep for J.Lo and Eddie Murphy — their real trophies are their revived acting careers

As for Murphy, he is expected to compete for his hosting spot last year on “Saturday Night Live,” part of his comeback launch tied to his 2019 Netflix biopic comedy, “Dolemite Is My Name,” where he played blaxploitation stand-up and movie star Rudy Ray Moore. It was his third time hosting the show, and he revisited and updated some of his most popular “SNL” characters and skits including Gumby, Buckwheat and Mr. Robinson.

The comic, who is better known for his blockbuster films such as “48 Hrs.,” “Trading Places” and “Beverly Hills Cop,” has been nominated for four Emmys. Three of those were for “SNL”: as a supporting comedy actor in 1983, then as a variety performer and writer in 1984. He also was nominated as the creator of the short-form stop-motion Fox animated sitcom “The PJs” in 1999.

In our combined prediction odds, Murphy is on top with 18/5 odds while Kirby sits second at 9/2, but both are rising at the moment. They both have rivals from their shows competing against them, though. Kirby is up against co-star Zachary Levi who plays Midge’s almost-fiance Dr. Benjamin Ettenberg, who she kissed off when she got the opportunity to go on tour. Levi is in sixth place with 13/1 odds.

Meanwhile, “SNL” writer John Mulaney is up for his third hosting stint on the show and may provide some competition for Murphy. He has 11/2 odds and is in third place while Tom Hanks is also in the running for hosting the show in eighth place with 35/1 odds.

Be sure to make your Emmy predictions today so that Hollywood insiders can see how their TV shows and performers are faring in our odds. You can keep changing your predictions as often as you like until just before the nominees are announced on July 28. And join in the fun debate over the 2020 Emmys taking place right now with Hollywood insiders in our television forums. Read more Gold Derby entertainment news.