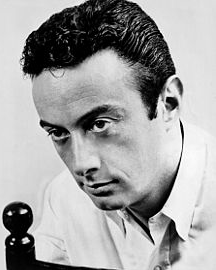 Recently, the hit TV series The Marvelous Mrs. Maisel has brought the comedian Lenny Bruce, who has become more famous after his 1966 death than he was in life, back into American culture. Is it possible that a profane and irreverent Lenny Bruce as portrayed in The Marvelous Mrs. Maisel performed on a Nyack stage? According to William Motto, who worked for the Rockland Theater for 37 years, “Lennie (sic) Bruce, who went professional as a comedian after the war, used to appear on the stage at Rockland Theater when he was stationed at Camp Shanks.”

What was the theater like during WWII? Did servicemen visit Nyack? If Bruce appeared, what kind of act was it? Did he ever work with a comedian like the fictional Mrs. Maisel or hear the following routine?

Lenny Bruce : “Well, I’ve been doing it awhile. Ok, let’s put it like this: If there was anything else in the entire world that I could possibly do to earn a living, I would. Anything! I’m talking dry cleaners to the Klan, crippled kid portrait painters, slaughterhouse attendant. If someone said to me, ‘Leonard, you can either eat a guy’s head, or do two weeks at the Copa,’ I’d say ‘Pass the f***ing salt.’ It’s a terrible, terrible job. It should not exist. Like cancer. And God.” 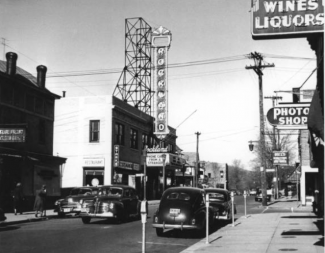 The Rockland Theater in early 1950s. Across from the theater is a sign for Bill’s Rendezvous in front of the building that now houses the Runcible Spoon. Photo courtesy of the Nyack Library.

The Rockland Theater was Nyack’s answer to the movie palaces that were being built throughout America in the 1920s and 1930s. Opening in May, 1928 on N. Broadway between High and New Streets, where Nyack Mews apartments are now located, the theater was the epitome of movie elegance.  Moving pictures and vaudeville acts dominated the large stage during its start and into the 1930s. A large organ and small orchestra accompanied live acts. Talkies came in soon after the theater opened. First-run films, newsreels, and cartoons filled the main floor and balcony beneath the 3,000-pound chandelier hanging from an interior dome decorated, along with the rest of the interior, in a Mediterranean style.

During WWII, servicemen came to shows. Five million dollars in war bonds were sold by the theater, highlighted by appearances from Hollywood figures such as local legend Helen Hayes. 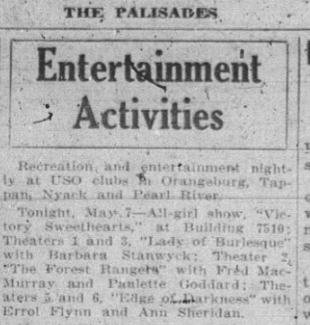 Camp Shanks in Orangetown housed thousands of soldiers departing for Europe from the Piermont Pier and towards the end of the war housed returning veterans. Soldiers usually stayed only a short while at the camp, aside from the resident staff and German POWs. Camp Shanks had the best in entertainment, including singers like Frank Sinatra and Bing Crosby and Hollywood stars. The base had a number of movie theaters on site running daily movies. Nearby, dances for soldiers were held at Letchworth Village. Still soldiers like to get out on their own, and Nyack was often a destination for saloons, movies, and the USO. 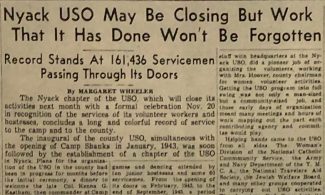 A special party was held for Japanese-American soldiers in 1945. The club was jammed, music could be heard out on the street, and the club was decorated in red and white with rows of delicious cakes and pies and steaming coffee. Members of the Martha Graham dance group had offered to entertain the soldiers since not enough girls could be found as dancing partners at Camp Shanks or in Nyack.  During the party, according to a Journal News reporter, “a pretty girl was dancing an authentic hula. Everyone crowded around her and smiled in approval.” One soldier said, “Yes, she’s swell, but let’s dance some more.”

Most military personnel who came to the Nyack USO were from Camp Shanks, but many marines came from Iona Island, and many sailors came from Huntington Lodge or from docked boats. Sgt. Dixey Dugan wrote a letter from England: “I had so many good times in Nyack that I just wanted to drop a line and thank you for the swell times,” he wrote. “I guess we’ll never forget Nyack. The boys talk about it nearly every day.” 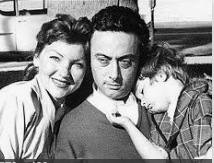 Family man Lenny Bruce in the 1950s before he was popular.

Leonard Alfred Schneider joined the US Navy in 1942, at age 16. His parents were separated; his father, Mickey, was a podiatrist and his mother, whose stage name was Sally Marr, was an entertainer. Bruce served as an artillery shell passer on battleships in a number of Mediterranean campaigns during the war. He saw action in North Africa, Palermo, and Sicily. In 1945, he was discharged from the Navy after appearing in drag at a performance and expressing homosexual urges to his superior. (Bruce later had his dishonorable discharge changed to “with honor.”)

Shortly after leaving the Navy, he signed onto the Merchant Marine for 18 months. According to his autobiography, How to Talk Dirty and Influence People, life was easier then; he got paid as a Merchant Marine while his ships transported troops from the US to Europe and back.

Did he perform in Nyack or didn’t he?

Did the person who became a professional and took the name Lenny Bruce in 1947 appear in Nyack during WWII? In his earliest performances he was, according to an account in the Trials of Lenny Bruce, “a black-and-white bow tied, slicked hair version of a Brylcreem ad doing imitations of Cagney and Hepburn, the kind of burlesque he watched his mother performing on stage at a 1942 USO show when he was in uniform.” Much of his performance at the time was “family-friendly.” 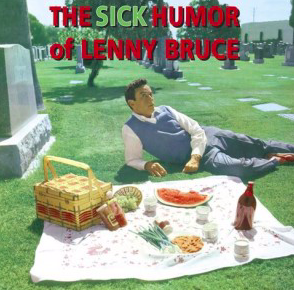 We know Lenny was performing as an amateur during and after the war and that he spent time in the Northeast while in the Navy and Merchant Marine. There is no other evidence of Bruce performing in Nyack other than William Motto’s statement. Motto also stated Bruce was at Camp Shanks. But Bruce would not have been stationed at Camp Shanks for any length of time, if at all. And yet, it is possible he stayed there when transporting troops to Europe.

It is also possible that Bruce visited Nyack while sailing with the Merchant Marine ferrying troops from Europe to Piermont Pier. Thousands of soldiers returned via Camp Shanks beginning in 1945. We know Bruce hung out in USOs and was drawn to the entertainment world, whether it was for movies or for special performances, as occurred at the Rockland Theater.

While William Motto’s memory some 20+ years after the fact might be faulty in detail, I’m inclined to give him the benefit of doubt. Motto’s other memories of the theater are spot on, so why not this one? Many others might not have even noticed that a family-friendly, and perhaps not too funny comedian named Leonard Alfred Schneider, appeared in the stage lights at the Rockland Theater in the mid 1940s. It’s Nyack after all, where anything and everything can happen.

Michael Hays is a 30-year resident of the Nyacks. Hays grew up the son of a professor and nurse in Champaign, Illinois. He has recently retired from a long career in educational publishing with Prentice-Hall and McGraw-Hill. Hays is an avid cyclist, amateur historian and photographer, gardener, and dog walker. He has enjoyed more years than he cares to count with his beautiful companion, Bernie Richey. You can follow him on Instagram as UpperNyackMike. 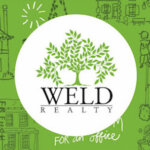 Nyack People & Places, a weekly series that features photos and profiles of citizens and scenes near Nyack, NY, is brought to you by HRHCare and Weld Realty.