(JTA) — In many TV shows, a character’s Jewish identity can feel like a throwaway, usually to showcase “difference,” religious diversity, or a useful stereotype.

Not so in “The Marvelous Mrs. Maisel,” which makes the characters’ Jewishness an integral — but not overdone — part of their identities. 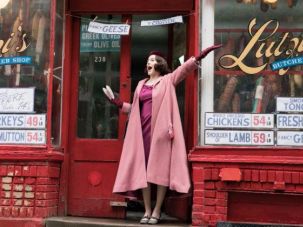 The show, will be released Friday as part of Amazon’s 2017 Pilot Season — in which viewers help decide which of five shows the streaming service will produce —  follows the life of Miriam “Midge” Maisel. She’s a 1950s housewife who seems to have a great life: She has a perfect Jewish husband, two young children, an apartment on the Upper West Side’s Riverside Drive, and, after four years of lobbying, a rabbi who has finally agreed to come to her place for the Yom Kippur break fast meal. 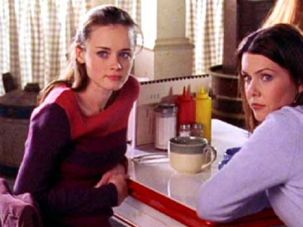 But things are about to change.

Soon after we meet the poised Midge (Rachel Brosnahan, “House of Cards”) her aspiring-comedian husband Joel (Michael Zegen, “Boardwalk Empire”) leaves her for his secretary.

Upset and inebriated, Midge runs off to a downtown bar where her husband sometimes performs. She jumps onstage and starts cursing off her husband, much to the crowd’s delight.

Although Midge’s impromptu flashing of the crowd earns her a 20-minute stint in jail, she impresses a local bartender, who is convinced that she is a comic genius. If the pilot is made into a series, it will follow Midge as she sets out to become a stand-up comedian.

Writer/director Amy Sherman-Palladino, who also created “Gilmore Girls,” said the show was inspired in part by the late Joan Rivers, an educated, middle-class Jewish woman who broke into stand-up in the late 1950s. Sherman-Palladino’s father was Jewish gag writer Don Sherman, and his better known contemporaries, including Lenny Bruce, get shout outs in the pilot.

The show is chockablock with Jewish content. Among the cast are Tony Shalhoub (“Monk”), who plays Midge’s traditional father Abe, and Marin Hinkle (“Two and a Half Men”), who plays her nagging mother, Rose.

Here are some of the episode’s most Jewish — and funniest — moments.

When four years of apologies for serving shrimp pays off

Midge is ecstatic when her family, after four years of trying, gets the rabbi to agree to come over to break the Yom Kippur fast. The relationship had been strained ever since her wedding, when she announced that the egg rolls being served contained shrimp. “It only took four years of apologies and a dreidel signed by Sammy Davis, Jr.,” Midge tells her butcher.

Brisket is the currency for affection and favor

Midge uses her Jewish cooking skills to curry favor with the owner of the downtown venue where her husband sometimes performs. In the beginning of the pilot, she presents the owner with homemade brisket — and she promises to bring latkes next time.

When Joel is jealous of the rabbi’s laughs

When Joel leaves Midge the day before Yom Kippur, he compares his stand-up act to the rabbi’s sermon. “I’m thinking about last week — we’re in temple, and the rabbi tells that stupid Sodom and Gomorrah joke and suddenly the whole synagogue goes nuts. He got more laughs in five minutes than I did in five months,” Joel bemoans. Midge quips: “You’re jealous of the rabbi? He was in Buchenwald, throw him a bone.”

Midge parents are plenty neurotic. Her mother can’t stop pointing out that Midge’s baby daughter’s forehead is too large, and when her father finds out that Joel is leaving her, he blames her — after all, she picked a “weak man” during her studies at the “the fancy, goyishe” Bryn Mawr College.

Plus a heaping portion of Jewish guilt

Toward the end of the pilot, Midge has a minor freakout when she realizes that it’s already Yom Kippur and she is downtown, eating at a bar. “I’m supposed to be fasting, atoning for my sins in the eyes of God,” she exclaims, rushing out of the bar.

Watch the trailer for Amazon’s five pilots below (skip to 0:59 for “The Marvelous Mrs. Maisel”):

The Forward’s independent journalism depends on donations from readers like you.